Intel and the Big Search Box

I was recently researching new ultrabooks and visited the Intel site for some insight on current processors.  When I arrived, I was  a bit shocked at what I saw… 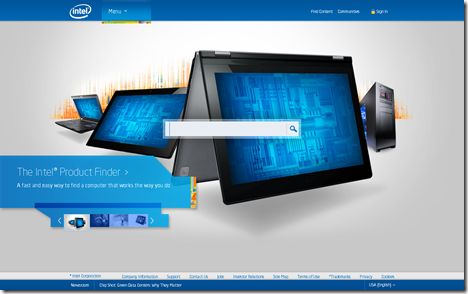 Waiting for me  was not the typical corporate web site, with menu-based navigation (at least not immediately apparent).  Rather, Intel was presenting, dare I say, a very "Google" like approach – enter a keyword-based query to find what you want.

If anyone has insight on this approach (e.g. real analytics supporting this experience strategy over more traditional IA), I'd love to hear about it.

Interesting cause for exception: System.InvalidOperationException: $metadata Web Service method name is not valid.


Interesting cause for exception: System.InvalidOperationException: $metadata Web Service method name is not valid.

When calling the web method the response would come back with no errors.  We noticed the data was not being saved to the server as expected.  After checking the event viewer on the server we found this error that made no sense to us nor offered much detail:

After searching the web a bit, we learned this was more so a mask error that covered up the true issue.  After digging around for several days, I attempted to test the service directly in a debug state in the server's browser.

The service responded with:

Could not load file or assembly 'Telerik.OpenAccess, Version=2012.2.816.1, Culture=neutral, PublicKeyToken=7ce17eeaf1d59342' or one of its dependencies. The system cannot find the file specified.

We somehow published a version of the telerik.OpenAccess dll that was different then what the service was looking for.

After re-publishing the service with the correct dll version, the issue completely resolved and the web method started saving data to disk.

Lesson learned, the meta data error that originally prompted our research had no relationship to the real exception.  If you come across this error in the future, debug the service straight against the problematic server's web browser to get the true exception.


Posted by Jeff Gwaltney at 4:55 PM No comments:

I have recently been busy putting the finishing touches on a new web application for a client in Indiana.  During the course of the project, we discovered that we needed to write a custom membership provider that would use secure LDAP to authenticate users (the ActiveDirectoryMembershipProvider does not, surprisingly, support the client's environment setup).

While developing the basic provider was relatively easy to complete (and used an Oracle LDAP provider we built previously), we ran into a series of challenges.  One challenge is now a support incident at Microsoft (more on that in a later blog).

However, during one of the debugging sessions, we noticed an "unspecified operation error occurred" exception being thrown.  Digging down, we discovered the reason code: "unwilling to perform"

I have never thought about putting that kind of reason in my code, but if Microsoft can do it, perhaps it's O.K.

When I started working as a consultant in the latter half of the 90's, our firm had writers that specialized in writing for the web.  These folks constantly had to help clients refine and organize traditional print copy for the "new" medium.

Recently, Jason Fried over at 37Signals published a short blog post that referenced a post by Maria Popova at BrainPickings.org highlighting writing advice from David Ogilvy, the original "Mad Man."  What I found fascinating is that the advice that Ogilvy delivered in 1982 is much the same advice our writers gave clients more than a decade later (in the context of writing for the web).